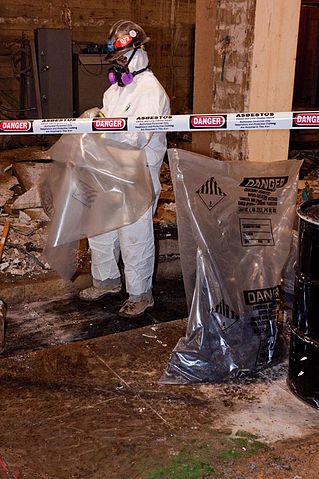 By Oregon Department of Transportation – Asbestos abatementUploaded by Smallman12q, CC BY 2.0, https://commons.wikimedia.org/w/index.php?curid=24374857

Asbestos is extremely toxic if inhaled. It can eventually lead to a debilitating illness called asbestosis, which eventually leads to a rather nasty death. Other illnesses it can cause are gastric cancer, lung cancer, mesothelioma and emphysema. The material is now banned in most countries and over the last 20 years has been removed from as many buildings as possible. Removal is not a simple process though and can cost a lot of money as well as being highly dangerous if the dust gets into the air.

Due to the design of some buildings, especially those with asbestos concrete, it may be impossible to remove it in some cases, and sometimes removal is just too dangerous. To solve both of these issues, asbestos encapsulation was developed. This is a process of encasing the asbestos in a safety cover to ensure it is sealed away for the life of the building.

By locking away the asbestos it means that none of it can sustain damage in the future and this ensures that none of the dangerous particles escape to the atmosphere. One additional benefit of doing it this way is that the fire retardant advantages of asbestos itself remain in place. The final benefit is that the cost of doing it this way is much cheaper than having it removed.

This process of encapsulation should be done by fully qualified professionals who know what they are doing, it is no good employing just anyone to do it as this is likely to cause more problems in the future, and unless they have been specifically trained for this job then whatever work they do is likely to be incorrect, as well as illegal in some countries.

Covering asbestos is now regarded as the safest way of dealing with it, however not everything can be covered using this technique. Things like pipes can corrode over time, and if they contain asbestos then they will need to be replaced as that is the best option.