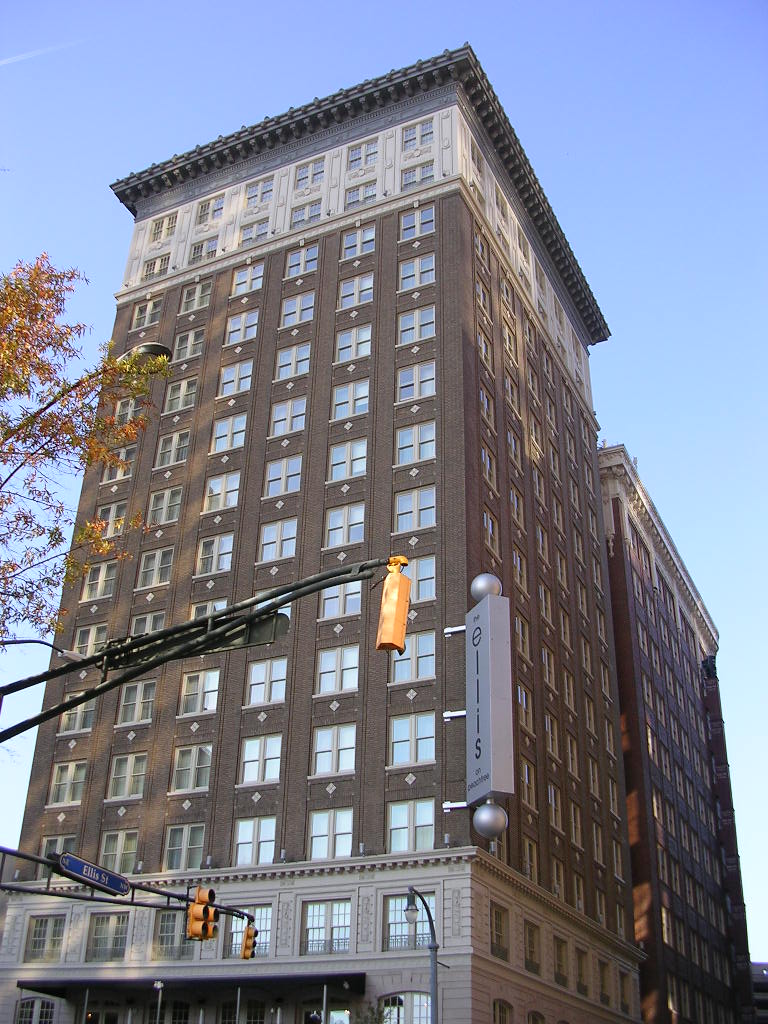 The Winecoff Hotel fire of December 7, 1946, was the deadliest hotel fire in United States history, killing 119 hotel occupants, including the hotel’s owners. Located at 176 Peachtree Street in downtown Atlanta, Georgia, United States, the Winecoff Hotel was advertised as “absolutely fireproof”. While the hotel’s steel structure was indeed protected against the effects of fire, the hotel’s interior finishes were combustible, and the building’s exit arrangements consisted of a single stairway serving all fifteen floors. All of the hotel’s occupants above the fire’s origin on the third floor were trapped, and the fire’s survivors either were rescued from upper-story windows or jumped into nets held by firemen. The fire was notable for the number of victims who jumped to their deaths. A photograph of one survivor’s fall won the 1947 Pulitzer Prize for Photography. The fire – which followed the June 5, 1946, La Salle Hotel fire in Chicago (with 61 fatalities), and the June 19, 1946, Canfield Hotel fire in Dubuque, Iowa (with 19 fatalities) – spurred significant changes in North American building codes, most significantly requiring multiple protected means of egress and self-closing fire-resistive doors for guest rooms in hotels.

The fire, coming on the heels of the La Salle Hotel fire, had a major impact on building codes. A national conference on fire prevention was convened in 1947 at the direction of U.S. President Harry S. Truman in response to the La Salle and Winecoff fires. Both fires had highlighted the problems associated with unprotected stair openings, which provided paths for the spread of smoke (in the case of the La Salle Hotel) and fire (at the Winecoff), simultaneously preventing the use of the stairs for escape. The National Fire Protection Association’s Building Exits Code of 1927 had already set forth principles requiring the use of multiple, protected means of egress, and was further revised to allow the code to be incorporated as law. Emphasis in building design and construction was changed from the protection of property — the Winecoff’s “completely fireproof” statement on its stationery was accurate insofar as it was confined to the building’s structure — to place primary emphasis on the protection of life, with property protection subordinated to that goal. Georgia Governor Ellis Arnall reacted to the narrowly defined “fireproof” statement, stating:

The public is being defrauded when a hotel is advertised as “fireproof,” but really isn’t. Responsible agencies should prohibit the use of the word “fireproof” when a hotel is not really fireproof as the Winecoff obviously was not.

Fireproof construction was a term primarily originating with the insurance industry, which was chiefly concerned with property loss claims. A “fireproof building” could withstand a severe fire and be returned to service once its interior finishes were replaced, without total loss due to collapse or damage to adjoining structures. The Building Exits Code was significantly revised in 1948 to address issues of finish combustibility, detection and warning, and provisions related to the number of people in the building.
To highlight its principal emphasis, the Building Exits Code was retitled the Code for Safety to Life from Fire in 1966.

The Winecoff fire led to the incorporation of wartime research into the flammability of building materials into code requirements and design standards, recognizing the existence of flashover as a means of fire propagation. The Winecoff was cited as a notable example in which multiple flashovers served to propagate the fire at each successive level. The La Salle and Winecoff fires, in which combustible finish materials were prominent hazards, spurred the adoption of the Steiner tunnel test which had been used by Underwriters Laboratories to establish the relative fire hazard of materials as the ASTM-E84 and NFPA-255 standards from 1958. The prohibition of operable transoms in guest rooms was a direct result of the Winecoff fire.

The Winecoff fire also stimulated debate concerning the ex post facto enforcement of new fire code requirements in older properties. Until the rash of hotel fires in 1946, such legislation was regarded as an unconstitutional taking of property. Newer legislation enabled the enforcement of standards for existing buildings in addition to new construction.

Family and friends of victims and survivors gathered in Sandy Springs for the 70th anniversary of the fire and remember the victims.